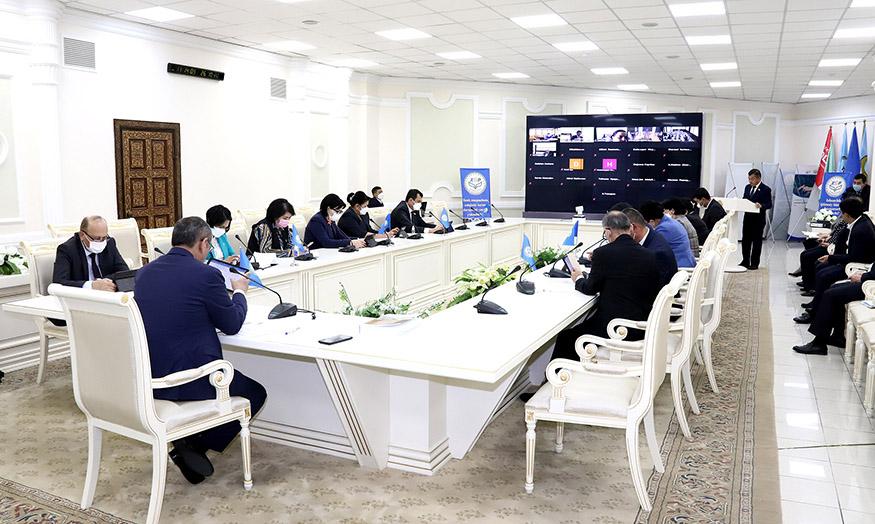 Members of the faction of the People’s Democratic Party of Uzbekistan in the Legislative Chamber of the Oliy Majlis heard and discussed the report of the Cabinet of Ministers on the implementation of the State Program “Year of Science, Enlightenment and Digital Economy Development” in the third quarter of 2020.

Head of the Secretariat for Macroeconomic Analysis and Poverty Reduction of the Cabinet of Ministers, Ayubkhon Kamalov, gave detailed information on the implementation of the State Program and 5 priority areas.

The State Program consists of 284 items, 163 of which provide for the development of draft normative-legal acts, 121 programs of measures and other documents. Within the framework of the State Program, it is planned to implement projects for 18.2 trillion UZS and 10.3 billion USD.

In March-September 2020, 173 items to be implemented were outlined in the State Program, of which 99 items were completed fully and on time. As previously reported, the deadlines for 16 items were extended in accordance with the established procedure, for the implementation of 53 items, relevant projects are under consideration. Necessary measures are being taken to ensure the execution of 5 items. 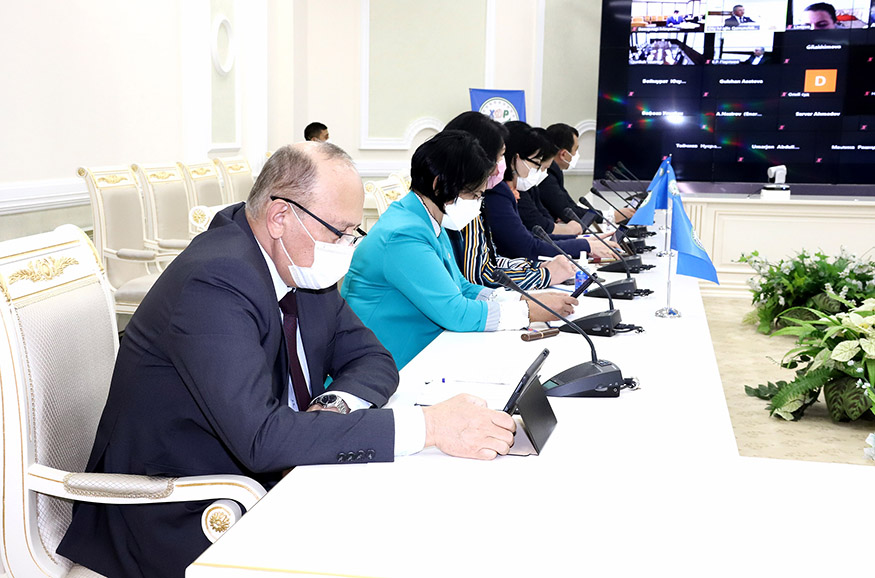 According to preliminary estimates, in January-September this year, GDP growth is expected at the level of 0.3-0.5%.

Members of the faction of the People’s Democratic Party of Uzbekistan noted that, despite the difficulties that arose during the pandemic, the government of the country has carried out large-scale activity to provide the implementation of the State Program, in particular, to ensure the interests of the party’s electorate – low-income and vulnerable segments of society.

In order to systematically organize the material and non-material support for the needy segments of the population during the pandemic:

A list of low-income families in need of material assistance and support was compiled, “Iron Notebook”, together with the heads of 4 sectors, representatives of mahalla committees, the general public and deputies of local councils. The saxovat.argos.uz program was launched and the “Temporary Procedure” for creating a source of income for able-bodied unemployed family members was approved.

In short, in the context of a pandemic, the government focused on the implementation of important tasks related to social protection of the population, maintaining social stability in the country. 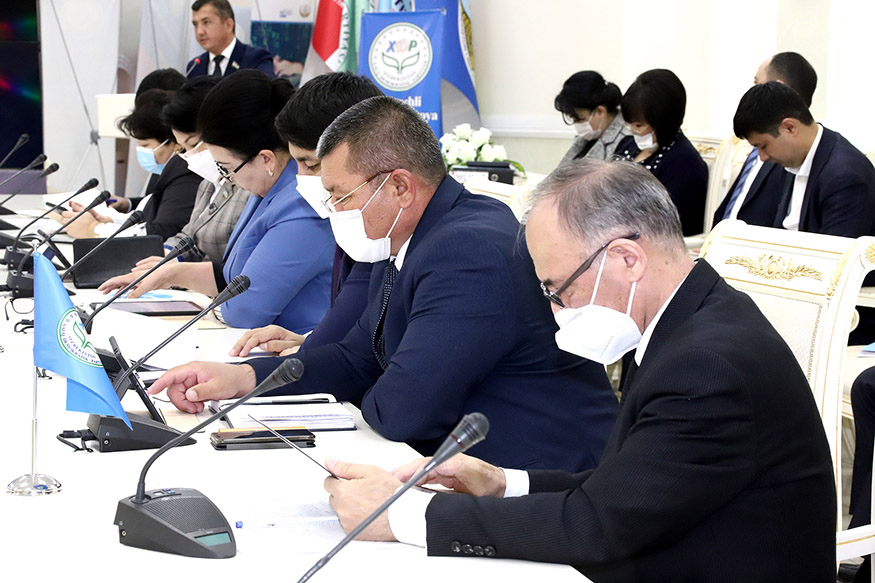 At the same time, during the discussion of information on the implementation of the State Program, the deputies expressed their objections on some issues, as well as proposals on a number of issues related to the social sphere and everyday life of the population.

As it became known, talks were held with experts from international financial organizations, including the United Nations Development Programme, the World Bank and the Asian Development Bank. Work has begun on development of a number of conceptual documents for poverty reduction with involvement of 14 foreign and domestic experts and observers (5 foreign and 9 domestic). As noted, a methodology for calculating the poverty line and criteria, widely used in the world practice, is being developed.

However, members of the faction noted that the Report lacks detailed information on the normative and legal documents in the process of preparation in the direction of poverty reduction.

Responsible authorities were given a clear task to determine the “subsistence minimum” until October 1 this year. Deputies asked for specific information on the work carried out to fulfill this task, as well as on the attitude towards the proposals made by the faction to the government in this direction. They emphasized that this is a matter of principle for the faction of the People’s Democratic Party of Uzbekistan. Responsible agencies informed that they will soon submit draft regulations.

According to deputies, today, legal documents are urgently needed, which will become the basis of a unified system for reducing poverty in the country.

At the meeting of the faction, issues of employment of the population, increasing the role and influence of state structures on the observance of labor legislation, improving legislation, regarding labor relations between employers and employees, combating unreasonable price increases in the markets, limiting the negative impact of the human factor on decisions to include or not including schools in construction and renovation programs, the need for developing a clear strategy at the state level in this regard, were also discussed.

The answers and comments of officials of the government and agencies to the questions and proposals of deputies were heard. On this basis, the faction of the People’s Democratic Party supported the government’s report on the implementation of the State Program for 9 months of this year. 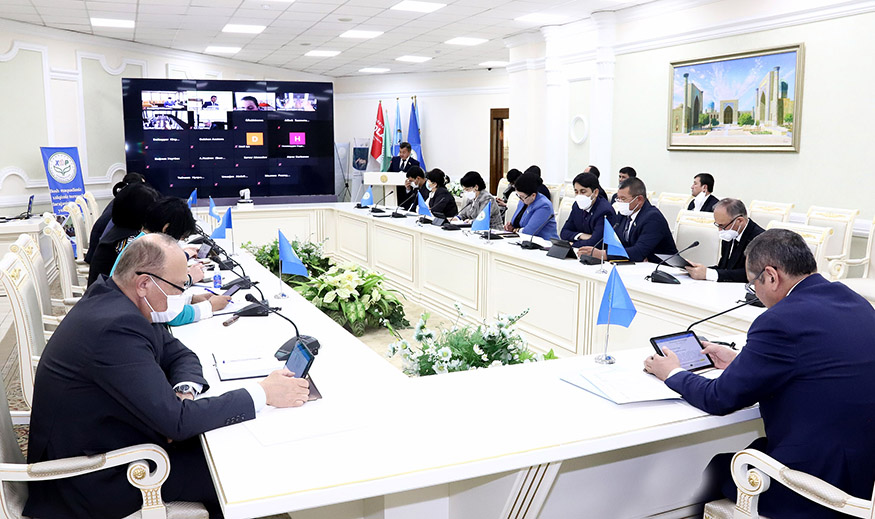 A number of draft laws were also discussed at the meeting of the faction. Deputies expressed their proposals.

A draft decree of the President of the Republic of Uzbekistan “On additional measures to further improve the education system, accelerate the development of science” was also considered at the meeting with participation of representatives of the regional organizations of the People’s Democratic Party and deputies of local councils. Deputies emphasized the importance of a radical renewal of the approach to education and science at this turning point in the history of Uzbekistan, laying the foundation for a completely new era of revival – the Third Renaissance. It was noted that the draft document should be comprehensive and perfect in all respects.

Therefore, proposals on the draft document will be accepted from members of the faction of the People’s Democratic Party of Uzbekistan, deputies of local councils and other activists throughout the country. A Working Group has been formed to summarize all the proposals and form the final position of the faction.